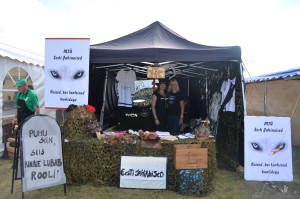 It was a lovely weekend when all the huntsmen decided to gather in Võrumaa to compete in slightly more difficult and exciting “huntsmen competitions.” Of course what was not missing was a decent fair and a mighty party. Weather also decided to play a joke on us and allowed the sun to come out from hiding – instead He flooded Tallinn’s tunnels.

On June 8-10, The Estonian Hunters’ society organized a big hunters’ convention, where nearly 4000 people gathered to pleasantly spend time together and to, as it is characteristic to this certain group, talk about “hunter’s tales.” Shots were fired, dogs presented on a show, people went fishing and on the last morning the game calls were so naturalistic and good that the road home was not so tempting after all.
The fair and kids’ area were so rich and diverse that all the huntsmen and –women and their husbands and wives and kids had something to do. Of course, the most exciting place was the Women Hunters’ pavilion ;) because there you could meet real, active and sparkly-eyed hunter-ladies. The main sponsor of the event, Huntfish Heino, had put its pavilion next to the Women Hunters, offering delicious game- and fish dishes next to Women hunters’ interesting souvenirs. It can not be mentioned that already on the first day, Heino dazzled the Women hunters with his strength, advice and cooking skills. The women also gave their best to charm Heino, and the result was that we can meet him at autumn’s big event and on the first anniversary of Women hunters’ event “For Women Hunters Only 2016” which takes place October 22.

A separate thank you is in order for the Latvian huntswomen, who came to the convention at the invitation of Estonian Hunting Dog Society and NGO Estonian Women Hunters. We also thank them for taking part in the dog show and visiting the Women Hunters’ pavilion. Some invitations were exchanged for several events and a thought of organizing some events together also came up. The collaboration between Latvian and Estonian women hunters has been strong. Going together to different events motivates women to find use for their interest in hunting and the collaboration of Women hunters in two different countries is also a very good opportunity to raise knowledge about the environment and to spread information regarding hunting in general among huntswomen and –men. The Latvian women hunters are already familiar with the Estonian Hunters’ Society, but every invitation and event spent together is strengthens the foundation even more. When there is active cooperation and exchanging information and when the relationship is “hunter friendly”, then there is hope that the collaboration between women hunters gives results both in Estonian and Latvian hunting terrains and that the foundation will one day have a storm-proof roof.

The Women Hunters also thank all the hunters for their reasonable contribution in road safety. Sometimes it feels quite silly to blow into the Breathalyser for nothing especially when you feel like you could drive already. However, if there is even a small suspicion you should always wait and rest for some hours and then try the Breathalyser again. Before you use a Breathalyser you have to make sure that it is calibrated correctly and that the results reflect the actual situation! This year, Women Hunters brought with themselves Alcoscan Breathalyser, which had been calibrated and controlled right before the convention and had been taken along keeping in mind the safety of the hunters. The Breathalyser did its job and some hunters had to take a few hours’ rest before they could drive. But fear not! the Women Hunters did not leave the huntsmen alone in their trouble. We waited together until the Breathalyser showed zero and together we started towards home.

Until next year! But for now, we hope you have exciting hunter’s adventures and have a nice hunting season!