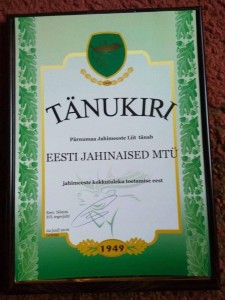 NGO Estonian Women Hunters at Pärnumaa Hunters’ convention.
Pärnumaa hunters’ society’s convention took place July 2, in Häädemeeste parish, Maja village on Estonian State Forest’s Lemme tenting area. 18 different hunting societies took part of the convention. The daily schedule was exciting and there were activities for everyone.
There were several competitions – in shooting, combined events, cooking, huntleader competition, a quiz and also theatre.
The pressure of competing was relieved by middlemen of game and a bow-hunt workshop. Those who wanted could try sharp-shooting and kids could go on the trampolines.
Rewards were handed out at the end of the day and dancing was made possible by the band Härra Kuu. The general victory stayed in the home parish, because the winner was the local Orajõe hunting society.
We got lucky with the weather, participation was good and the event, all in all, was successful.
Estonian Women hunters were also given the opportunity to contribute to the convention. We thought of and arranged combined events competition, our representative also judged the cooking round. This fun event will be commemorated by the thank-you diploma from Pärnumaa Hunters’ association.
The main organizer of this even was the executive director of Pärnumaa Hunters’ society – Eero Nõmm.
Juulia Jürgens (NGO Estonian Women hunters, Tori-Sindi hunters’ society)
Külliki Kiiver (NGO Estonian Women hunters, Orajõe hunters’ society)

We’ll meet again already at the hunters’ convention in Võru.