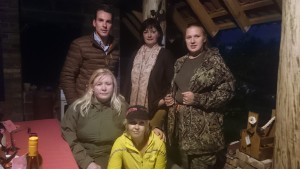 On August 6th, our women hunters went to a thrilling beaver hunt. It was not an ordinary hunt with guns and snares, but an exciting beaver hunt with landing nets. For many of us, it was a first-time experience dealing with landing nets and it was extremely satisfying to see that there were seven of us there! All of it was also being recorded by the Estonian Hunters’ society’s reporter and by a delegation from Wild and Hund, which is a magazine from Germany, known for its clips and reportage.
The day began with gathering and an opening speech by the lead hunter. Then we headed for the start point of the first battue where all the necessary equipment had to be taken for breaking the dams and also the nets for catching beavers. There was work for everyone and due to everyone’s joint effort, it did not take long before the dams were broken and the water flown off enough so that the dogs were able to enter the burrows and the hunting could begin. The day was long and adventurous and the game bountiful! Of course, the day was not amiss without good weather, pleasant company and homemade fresh beaver-solyanka. It is always great to be in a hunting company where women are respected and experiences and practical teachings are shared with a generous heart.

We thank the organizers for an unforgettable hunt and for the invitation to participate next year as well!