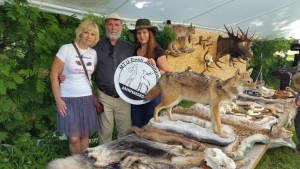 On July 4, in Häädemeeste, took place the 11th North-Livonian festival, which was this time dedicated to hunting, being called “Hunting-special.” The event was awaited, and was visited by 2000 people.

The event introduced hunting in general and helped to make hunting traditions more known and appreciated.
The annual festival, held on the banks of the Livonian bay began already the evening before with a gourmet-dinner at Mart Ruuli’s farm, who is a hunter and entrepreneur. The tasty dinner was spiced with talk about hunting.
Both hunting societies of Häädemeeste parish were represented at the festival – Orajõe and Massiaru. In addition to them, NGO Women Hunters Estonia was also represented. The hunting societies and Women hunters Estonia presented in collaboration with Estonian Hunters’ Society and Pärnumaa Hunters’ society taxidermy specimens, hunting tools and catches. Next to the regal, prized trophies (elk, wolf, lynx) a specimen of a jackal that was shot in a local village got people’s attention. Some saw the animal that close by for the first time. Also exhibited were prized fangs, different skulls and, for example, a skin of a seal. The organizers of the exhibition were excited, asking the onlookers which animals the skulls belonged to. The fact that many knew the right answers gives proof that there is interest in animals and hunting.

One of the most educational parts of the festival was the presentation by Tõnis Korts, the executive director of Estonian Hunters’ society, on the topic “How to become a hunter.” The presentation was full of subject matter and generated interest in hunting. The lecture was listened with great interest and most likely there were listeners among the crowd who will one day become a hunter.

At the demonstration of hunting dogs, owners of different breeds showed the skills of their four-legged friends. The agility show by agility club “My Friend” was most definitely one of the most fun and memorable moments that was intently watched by the young and old both. A favourite of many was a border-collie who, with insane speed, passed through all the obstacles. Armament, technology and gear of a soldier was shown and introduced by the Defence League’s Pärnumaa malev’s Kikerpera unit.

Local photographers, Märt Kose and Jüri Looring had set up a hunting-themed photostudio in the civic centre, where everyone who wished to, got to pose with trophies and a hunting gun in front of a special backdrop.
Those who were interested, got to see a movie “Seal Hunting in Finland.”
Old hunting photos from 1952 by Pärnumaa Hunters’ Society created nostalgia and were enjoyable to look at. In the pictured you could see fun lynx-hunters, hunters with ties and much more.
The highlight of the day was a whole boar speared and masterfully grilled by Orajõe hunters’ association and which was delicious and eaten entirely.

What was not missing from the hunting themed day was entertainment – that was taken care by local singers and dancers and also from neighbouring parishes and Latvia. The day was ended by a dance party that lasted until early morning.

The festival was organized by a team led by Anneli Lehtla who is the manager of Häädemeeste Hobby centre. Hunting advice was given by hunters from Orajõe hunting association.
Special thanks goes to its chairman Uno Lehtla.